“Design Leaders,” a new series from Next City, highlights mayors’ roles in design and the built environment in their cities. In the first installment, Birmingham, AL Mayor Randall Woodfin shares the story of Ensley, a historically underinvested neighborhood that will soon see major improvements on the site of its most prominent building. Mayor Woodfin, a 2018 MICD alum, also participated in the inaugural MICD Just City Mayoral Fellowship in Fall 2020. 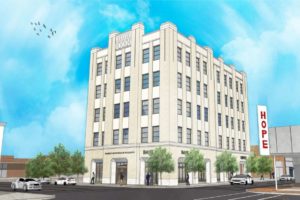 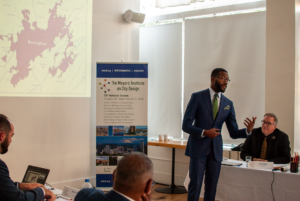 Randall Woodfin wore a hole through his leather loafers going door-to-door campaigning for Birmingham’s mayoral race in 2017, ultimately beating a two-term incumbent to become the city’s youngest mayor in more than 120 years and one of its most progressive of all time.

He particularly remembers introducing himself to residents of Ensley, a historically segregated neighborhood that suffered from the decline of the city’s steel industry. “They wanted better,” Woodfin recalls, “And after listening to residents I knew they deserved better.”

Soon into Woodfin’s mayoral term, his administration turned its focus on Ensley’s historic business district — the former heart of the neighborhood that the city has ignored for decades. In early 2019, city officials called for proposals for redevelopment of its buildings and properties. By October of 2020, Woodfin’s administration launched redevelopment of a well-known Ensley landmark, the long-dilapidated Ramsay-McCormack Building, into a community-centered startup hub.

“We don’t look at this as a city building, we look at it as a community building,” Woodfin says of the investment.