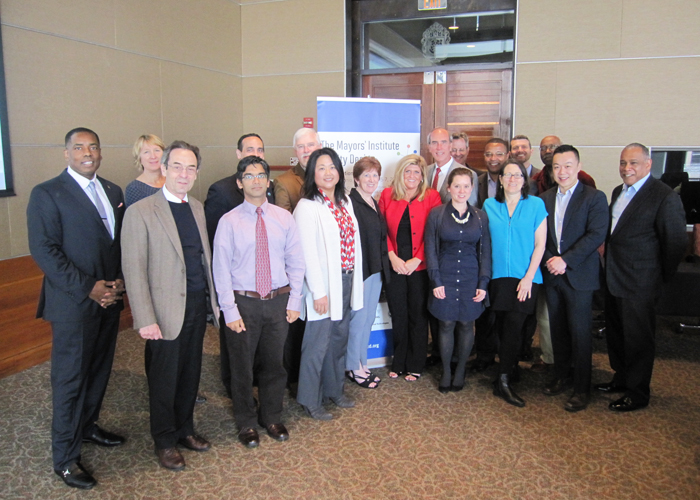 The 58th National Session began with a walking tour of downtown San Antonio led by Lori Houston, Director of the City of San Antonio Center City Development Office. The tour showcased several downtown sites, including the Alamo and San Antonio Riverwalk. Later that evening, the opening reception and dinner were held at the Empire Theater, a redeveloped cultural facility. Mayor Julián Castro welcomed participants to the City of San Antonio after remarks were made by the Mayors’ Institute on City Design Director Trinity Simons; National Endowment for the Arts Director of Design Programs Jason Schupbach; and the United States Conference of Mayors Managing Director Tom McClimon.

Mobile Mayor Stimpson initiated the design discussions the following morning, presenting on his city’s efforts to integrate parts of the working waterfront to downtown. The city would like to improve access and connectivity to the waterfront attractions, including the convention center, Cooper Park, the new National Maritime Museum, and a cruise ship terminal. The Resource Team stressed the importance of protecting and maximizing the public realm on the waterfront and advised the mayor to make Water Street more walkable and pedestrian-friendly through road diet strategies and streetscape improvements.

Cape Coral Mayor Sawicki followed with a presentation on her city’s efforts to create a cultural and entertainment hub in the central business district. The city is searching for opportunity sites along Cape Coral Parkway to develop and promote as the heart of downtown. The Resource Team identified Bimini Basin on the west end of downtown as an area with the highest development potential and gave guidance on how the city can target businesses and housing in this node, using creative techniques and incentives.

Somerville Mayor Curtatone presented on his city’s efforts to redevelop and master plan the area around Union Square, the site of a future light-rail station. In this capacity, the city needs to strike a healthy balance between meeting the demand for new housing spurred by transit and preserving the unique character of the neighborhood. The Resource Team encouraged the mayor to enlist design professionals from different firms and disciplines to ensure the architectural diversity within the planning area.

Plano Mayor LaRosiliere concluded Thursday’s discussions with a presentation on the aging commercial centers located at one-square-mile intersections throughout the city. The mayor has selected the Parker Road and Alma Drive intersection as a demonstration project for commercial center redevelopment, exploring opportunities to enhance and reimagine the design and use of the existing site. A successful project would provide a coherent redevelopment vision for other commercial centers in Plano. The Resource Team laid out some development options for the city to consider, including the adaptive re-use of building structures for senior and mixed-generation housing, as well as a network of open spaces.

Albany Mayor Sheehan commenced the discussions on the final day of the Institute by presenting on her city’s effort to redevelop key parcels along the eastern boundary of the Park South neighborhood. The city is seeking appropriate uses for these properties that are located blocks away from downtown. The Resource Team weighed in on the possibility for the area to become a medical/healthy living district with the hospital and grocery store as anchor institutions, and encouraged the city to invest in the existing housing stock in the neighborhood.

Santa Rosa Mayor Bartley followed with a presentation on the annexation of Roseland, an unincorporated “county island” surrounded by the city. The mayor would like to develop a strong vision for the area and build momentum for annexation and future development. The Resource Team advised the mayor to take a community development approach when investigating the benefits of annexation and its impact on the people in the Roseland community, looking at the annexation issue through the prism of social equity and equitable development in addition to physical design.

Palm Bay Mayor Capote concluded the Institute by presenting on his city’s efforts to develop the Bayfront Village downtown entertainment district. The city would like to build and market the site, providing a variety of housing options to attract young professionals to Palm Bay. The Resource Team offered the mayor a pragmatic, step-by-step strategy to obtain the necessary pieces, build community support, and engage the university as partner in the longer-term planning effort.

The Mayors’ Institute on City Design is a National Endowment for the Arts leadership initiative in partnership with the American Architectural Foundation and the United States Conference of Mayors. The 58th National Session was sponsored in part by United Technologies Corporation. Since 1986, the Mayors’ Institute has helped transform communities through design by preparing mayors to be the chief urban designers of their cities. The Mayors’ Institute conducts several sessions each year. For a list of upcoming events, past attendees, or for more information, visit micd.org and follow @MICDdotORG on Twitter.