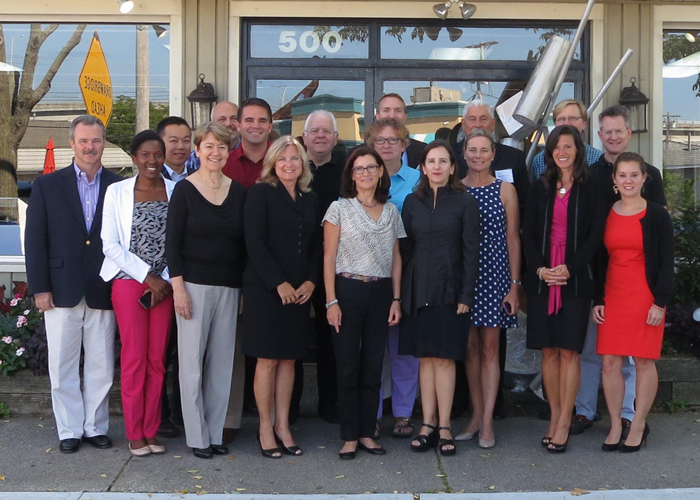 September 2013 – BELMAR – In response to Superstorm Sandy, the Mayors’ Institute on City Design (MICD) held a special design institute in Belmar, NJ from September 18-20, 2013. Over the years, MICD has been a leader in providing post-disaster design assistance, working with mayors in New Orleans and the Mississippi Gulf Coast after Hurricane Katrina and with mayors from Joplin, MO and Tuscaloosa, AL following recent tornados.

The Mayors’ Institute on City Design is a National Endowment for the Arts leadership initiative in partnership with the American Architectural Foundation and the United States Conference of Mayors. MICD was founded in 1986 by Charleston, SC Mayor Joseph P. Riley, Jr. During the last 27 years, MICD has assisted over 950 mayors in addressing their most pressing city design challenges.

Belmar, NJ Mayor Matt Doherty hosted this special design institute. After Sandy, Mayor Doherty was vocal amongst local leaders, pushing for state and federal funding. He spoke at the Tourism, Arts, Parks, and Sports Committee meeting this summer at the United States Conference of Mayors’ Annual Meeting in Las Vegas, stressing that the “Jersey Shore is open for business.”

Coastal New Jersey mayors met with design and development experts over a day-and-a-half to discuss critical design and planning challenges their communities are facing post-Sandy. Each mayor presented a case study, and experts in architecture, landscape architecture, urban planning, water infrastructure, economic development, and transportation offered pragmatic advice on how the mayors could approach the projects to rebuild stronger, more climate resilient communities.

Spring Lake Mayor Naughton initiated design discussions by presenting her borough’s efforts to prevent future flooding of Wreck Pond. The borough would like to elevate homes around the water body and build a “living shoreline” to reduce the impact of water overflow in an event of severe storm. The project also presents an opportunity to introduce recreational uses for the pond. The resource team gave design recommendations to prevent flooding and promote recreational uses, and they gave implementation suggestions on how to work with local and state partners to maximize results.

Sea Bright Mayor Long followed with a presentation that focused on the underutilized beach in her community. Public access to the beach is currently blocked by an uninterrupted sea wall that lined the borough’s uniquely narrow landform. The resource team gave guidance on appropriate programming of the beach that can help stimulate local economy and make Sea Bright an attractive regional destination.

Oceanport Mayor Mahon presented on his borough’s efforts to redevelop a portion of the decommissioned Fort Monmouth. The 98-acre site falls within the water-rise risk zone identified by FEMA. The resource team encouraged the mayor to reconfigure the existing site plan to improve transit access, foster retail activities, and create a pedestrian-friendly environment.

Belmar, New Jersey Mayor Doherty concluded the day’s discussions with a presentation on the borough’s new boardwalk that was rebuilt shortly after Sandy. Confronted with funding restrictions to build hard infrastructure, Mayor Doherty was seeking soft infrastructure solutions that would protect this community investment from the borough’s vulnerable shoreline. The resource team encouraged the mayor to consider natural sand dunes and/or engineered dune system to strengthen and protect the new boardwalk.

Lake Como Mayor Ryan commenced discussions on the following day by presenting his borough’s efforts to address the flooding issues caused by a lake that sits on three jurisdictional boundaries. The resource team gave guidance on how abutting communities could find long-term solutions to this problem that involve regional stakeholders.

Monmouth Beach Mayor Howard concluded the Institute by presenting her borough’s efforts to rehabilitate several municipal buildings that suffered water damage during Sandy. These structures are located on the same block and on a main street in the borough. The resource team advised the Mayor to consolidate uses and rethink the site plan for the entire block instead of focusing on restoring the existing complex to its pre-Sandy conditions.

This special design institute was sponsored in part by United Technologies Corporation. Since 1986, MICD has helped transform communities through design by preparing mayors to be the chief urban designers of their cities. MICD conducts several sessions each year. For a list of upcoming events, past attendees, or for more information, visit micd.org and follow @MICDdotORG on Twitter.