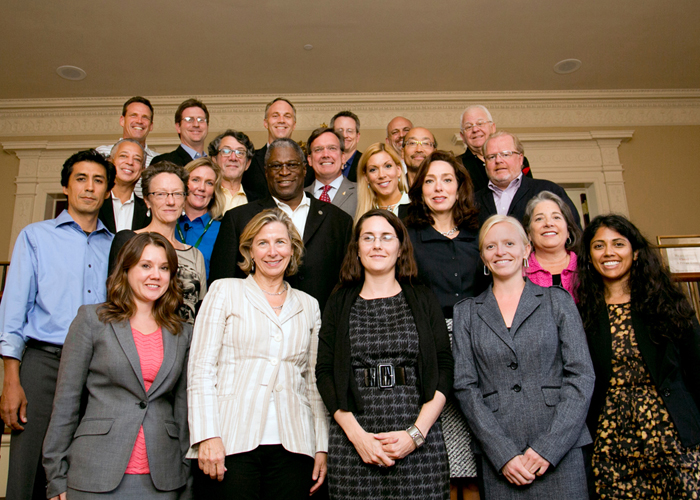 The 54th National sessions began with a tour of Downtown Charleston led by Michael Maher, Director of the City of Charleston’s Civic Design Center. The tour showcased major downtown sites that have been instrumental to Charleston’s transformation as a destination city, including King Street, the waterfront park, and the historic preservation efforts of many of the city’s residences.  Later that evening, a reception and dinner were held at City Gallery, which prominently features Charleston’s waterfront revitalization.  Mayor Joseph P. Riley, Jr. presented on the role of design in Charleston’s transformation after remarks were made by the National Endowment for the Arts Design Director Jason Schupbach, Mayors’ Institute on City Design Director, Trinity Simons; the United States Conference of Mayors CEO and Executive Director Tom Cochran; and American Architectural Foundation President & CEO Ronald Bogle, Hon. AIA.

Kansas City Mayor James began design discussions the following morning, presenting on his city’s on-going efforts to improve the 18th and Vine Historic District.  The city is looking for additional ways to attract visitors and residents to the area beyond the existing American Jazz Museum, the Negro Leagues Baseball Museum, the Gem Theater, and the Black Archives.  To address this, the resource team offered suggestions on how to increase neighborhood retail amenities and better connect the district to downtown along 18thStreet.

Irving Mayor Van Duyne followed with a discussion of the Las Colinas Urban Center, a major employment district within the region.  The city is looking to create an updated vision for the area that includes a greater density of retail, housing, office, and recreational opportunities.  The resource team encouraged the Mayor to create a strong identity for the urban center and compliment the vision through programming, marketing, and branding of the area.

New Bedford Mayor Mitchell presented on his city’s efforts to redevelop State Pier, an eight-acre industrial site along the waterfront.  The city hopes to take advantage of the reconstruction of Route 18 into a multi-modal boulevard to better connect the site with the downtown.  The resource team offered various short and long-term design strategies to activate the site and attract tourists and locals to the waterfront.

Phoenix Mayor Stanton concluded Thursday’s discussions with a presentation on the city’s vacant lot activation strategy.  The city hopes to showcase various temporary vacant lot revitalization techniques on a prominent site in the midtown area in hopes of inspiring positive change throughout the city.  The resource team offered several suggestions of uses on the site and encouraged the Mayor to continue engaging adjacent stakeholders.

Knoxville Mayor Rogero initiated discussions on the final day of the Institute by presenting on her efforts to strengthen connections to the Old City District.  The district has many historical assets but remains disconnected from the rest of the city by extensive highway infrastructure.  As such, the resource team focused on how to improve pedestrian and vehicular circulation and connectivity throughout the district.

Hartford Mayor Segarra followed with a presentation on Albany Avenue, a local arterial corridor within the city.  The city hopes to take advantage of future sewer separation and streetscaping projects to reimagine the corridor.  The resource team offered suggestions on how to maximize and focus these investments along Albany Avenue to improve connectivity and the multi-modal experience.

Columbus Mayor Tomlinson presented on her city’s efforts to revitalize historic mill neighborhoods along the Chattahoochee River.  The River is poised to become the longest urban whitewater course in the world, and with this conversion, the city hopes to improve adjacent neighborhoods.  The resource team offered guidance on strengthening major corridors within the neighborhoods to provide better connections to the river.

Greensboro Mayor Robbie Perkins concluded the Institute by presenting on his city’s efforts to create a performing arts center and encompassing cultural district in the downtown.  The Mayor focused his presentation on the importance of locating the potential performing arts center adjacent to existing cultural assets downtown.  The resource team encouraged the Mayor to continue with this idea, ensuring that he engage stakeholders in the design process.

The Mayors’ Institute on City Design is a National Endowment for the Arts leadership initiative in partnership with the American Architectural Foundation and the United States Conference of Mayors. The 54th National Session was sponsored in part by United Technologies Corporation.  Since 1986, the Mayors’ Institute has helped transform communities through design by preparing mayors to be the chief urban designers of their cities.  The Mayors’ Institute conducts several sessions each year. For a list of upcoming events, past attendees, or for more information, visit micd-st.camna.com.