Jaquelin Taylor Robertson, FAIA, FAICP, was a lifelong public servant dedicated to architecture, planning, and the public good. Among his many contributions to the broader field of urban design, Robertson was a co-founder of the Mayors’ Institute on City Design. He passed away on May 9, and his legacy is honored in obituaries by the New York Times, Architectural Record, Architectural Digest, and the firm he founded, Cooper Robertson.

The Mayors’ Institute on City Design was initially proposed in 1985 by former Charleston, SC Mayor Joseph P. Riley, Jr. in a letter to Robertson, then Dean of the School of Architecture at the University of Virginia, following a symposium there on design and politics. Robertson then submitted a proposal to Adele Chatfield Taylor, then Director of the National Endowment for the Arts’ Design Program. The NEA established the program as a leadership initiative and has served as its lead funder ever since. In response to Robertson’s passing, Mayor Riley shared the following:

“Without Jaquelin Taylor Robertson, the Mayors’ Institute on City Design would never have been created. When I proposed the idea, Jaque gave it his national reputation and brilliance in designing how the Institute and its leadership would work. It would be a small group of mayors, alone, that is, without any of their staff, and a small group of talented design professionals (about six or so). Each mayor would present a specific design challenge.

Jaque had been quite ill for a long time. I had a telephone conversation with him and most of our discussion was about the Mayors’ Institute and his pride in it. He had told me many times that of all the buildings he designed and all of his professional engagements, the Mayors’ Institute was his most important accomplishment.”

Today, the Mayors’ Institute meets multiple times each year around the country to prepare mayors to be the chief urban designers of their cities. Mayors often say that attending the Institute was one of the most impactful events of their career; their understanding of the importance of good design will remain a lasting impact of Robertson’s legacy.

“The United States Conference of Mayors has been a partner of the Mayors’ Institute since its founding, and Jaquelin Robertson’s legacy is felt every time we gather a group of mayors to improve the design of their cities. Through this program, his vision and passion for city-building has influenced every corner of our nation.”

“The reach of this program — one of our most impactful programs at the National Endowment for the Arts — is unparalleled. Our cities and our public realm owe much to Jaquelin Robertson’s visionary spirit and this program he helped launch decades ago.”

In his original letter to Robertson proposing the Mayors’ Institute, Mayor Riley wrote:

“I have often said that I am the chief urban designer of my city. By that I mean that because of my position as mayor, I have many opportunities to affect development. Most large development plans come through my office… With many of these projects, there are opportunities to make them better for the city or to allow them to be ordinary — or worse. This is true for most mayors. A city’s mayor has great opportunities to affect the quality of development there. The more sensitive the mayor is to good urban design, to issues of livability, scale, diversity, etc., the more willing and able he or she will be to help develop higher quality. If we could institute a program aimed at increasing mayors’ sophistication and interest in urban design, we could have a substantial impact on the quality of development in American cities.”

See the full letter below. 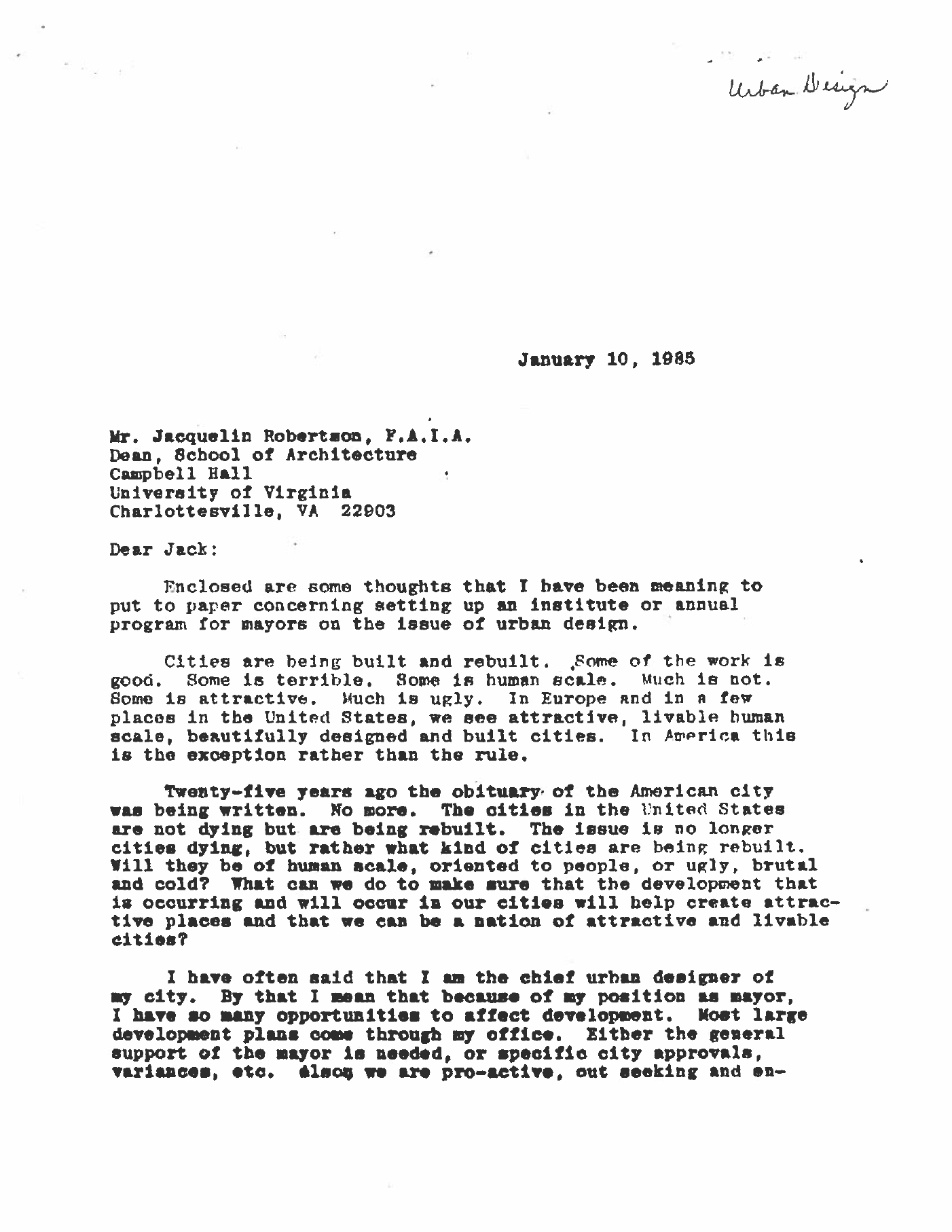 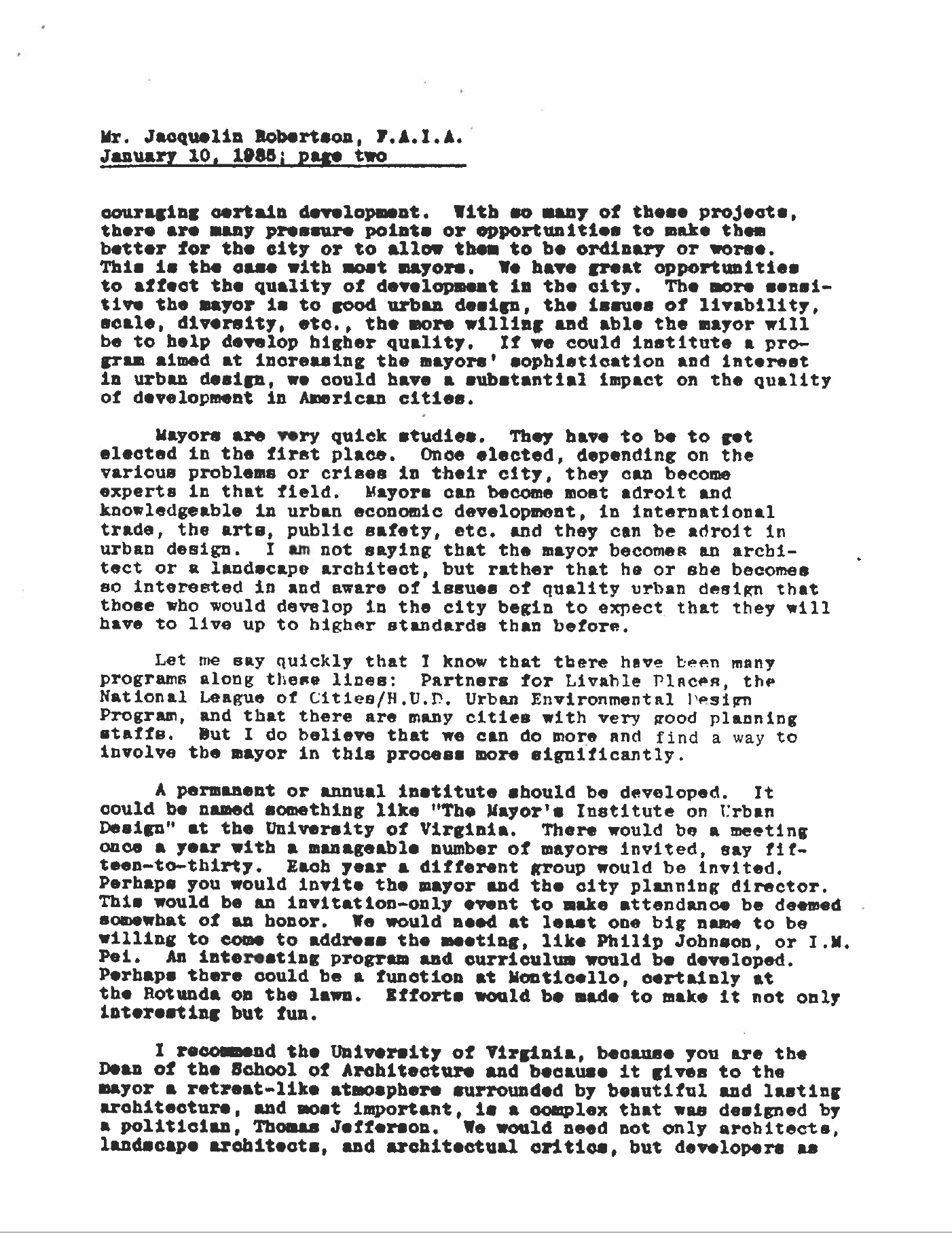 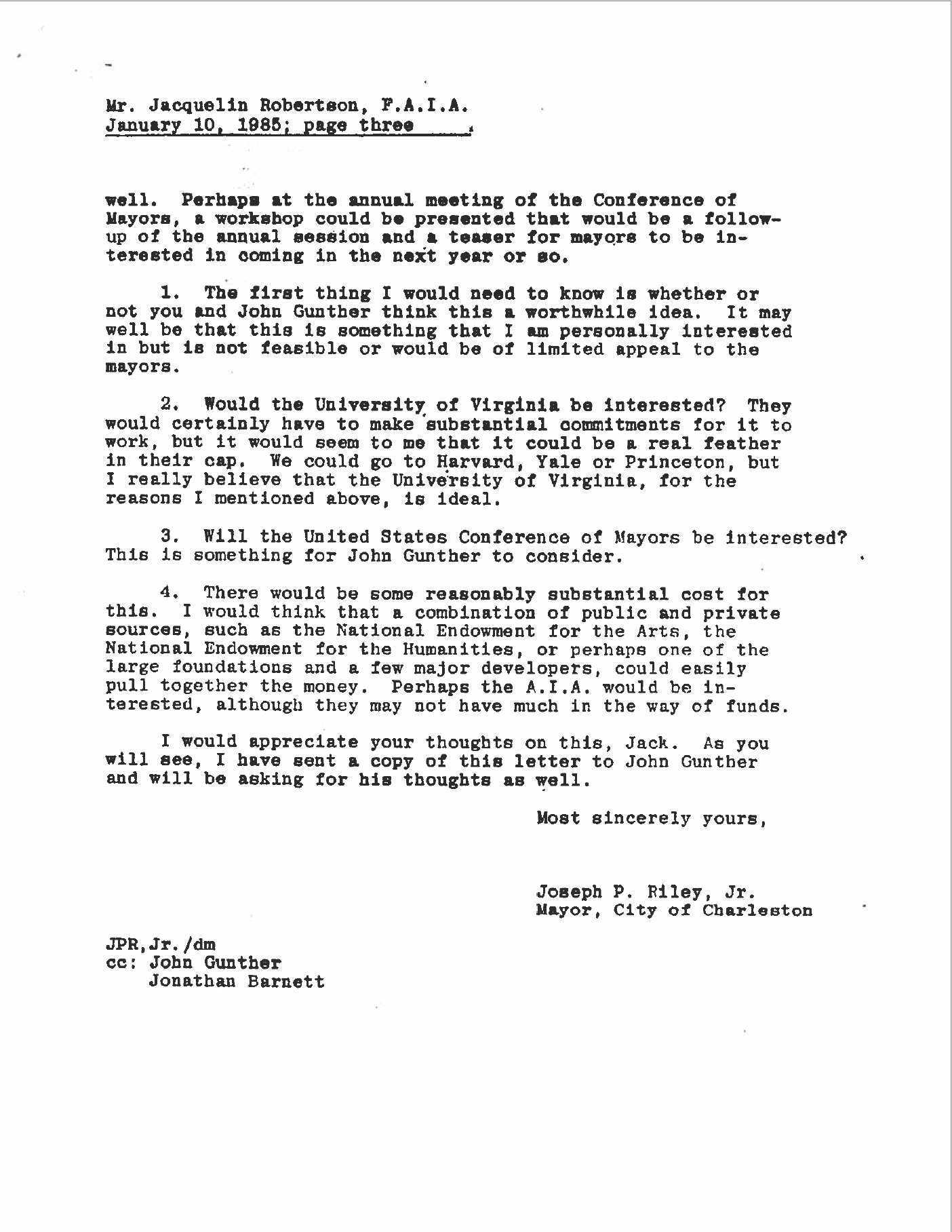