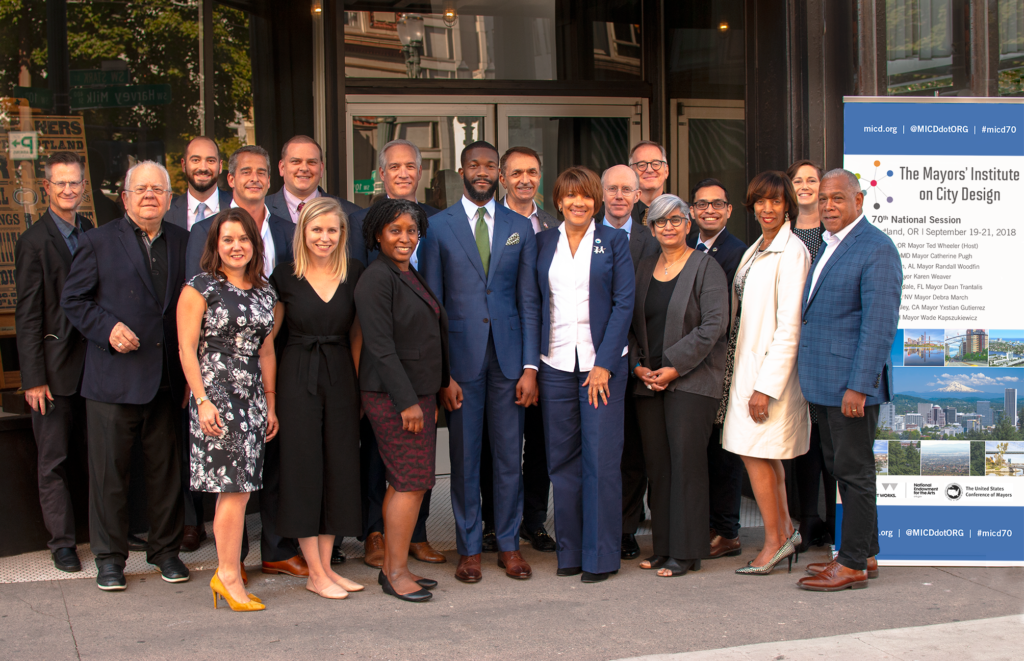 Experts in architecture, landscape architecture, urban planning, economic development, transportation, real estate development, and urban design joined the mayors in the two-and-a-half-day discussions and offered pragmatic advice on how the mayors could approach the design and development challenges facing each of their cities.

Mayor Kapszukiewicz initiated the discussions the following morning with a presentation on Toledo’s “Nautical Mile” project, which looks to reimagine the Maumee Riverfront in the vicinity of downtown. Following several catalyst projects on the west side of the river, a range of partners are coming together to develop the mostly-vacant east side. The Resource Team shared examples of comparable riverfront projects and other ways cities have attracted private investment through public realm improvements.

Baltimore Mayor Pugh followed, eager to hear the team’s thoughts on the future of the area around Pimlico Race Course. Mayor Pugh sought ideas on transforming this venue, used just a few times a year during the Preakness Stakes, into a vibrant anchor for a struggling area. The Resource Team offered ideas for better integrating the site into the surrounding neighborhood and making targeted investments to kick-start momentum in the area.

Next, Mayor Gutierrez introduced Moreno Valley’s Town Center project. To provide a central gathering place for residents in this suburban community, the mayor seeks to develop a vacant area into a vibrant hub of civic activity. The Resource Team suggested ways to use street design, placemaking, and a blend of density to create a unique and beloved community center.

Mayor Woodfin closed out the first day with a presentation on Birmingham’s Ensley neighborhood. With disinvestment dating back to the loss of steel industry jobs in the 1970s, the mayor has a crucial opportunity to reinvest in this historic area. The Resource Team suggested steps to catalyze activity on the historic 19thStreet corridor and beyond.

To kick off the second day, Mayor Weaver presented an overview of opportunities to rebrand Flint’s gateways and better communicate the exciting renaissance taking place in the city. The project sparked a lively discussion about using street design, wayfinding, and architectural cues to show off Flint’s unique character.

Mayor Trantalis concluded the session with a discussion of the area around a new high-speed rail station, which presents the opportunity to redevelop Fort Lauderdale’s City Hall and other publicly-owned properties nearby. A number of factors complicate this project, so the Resource Team recommended strategies for improving walkability and creating a world-class public realm.