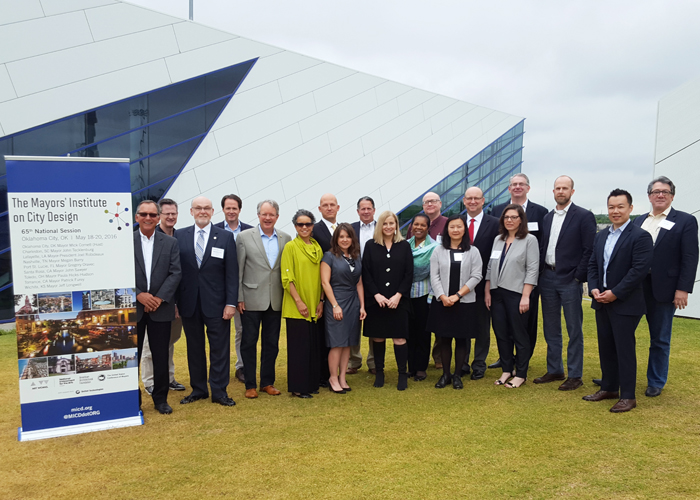 The 65th National Session began with a tour of Oklahoma City led by the Mayor’s Office. The tour showcased key redevelopment sites in the Boathouse District, Midtown, and downtown, including a major streetscape improvements project near completion. Later that evening, the opening reception was held at the Myriad Botanical Gardens, followed by dinner. Mayor Cornett welcomed participants to Oklahoma City after remarks were made by the MICD Director Trinity Simons, American Architectural Foundation President & CEO Ron Bogle, and The United States Conference of Mayors CEO & Executive Director Tom Cochran.

Mayor Hicks-Hudson initiated the design discussions the following morning, presenting on the city’s efforts to revitalize the Main Street commercial corridor in East Toledo. The city would like to bring restaurants, retail, and neighborhood-serving amenities to this underserved quarter and catalyze redevelopment in the surrounding neighborhoods. The Resource Team gave guidance on early activation strategies that would inform and shape the identity of Main Street and East Toledo.

Mayor Sawyer followed with a discussion on Railroad Square and the abutting Courthouse Square in downtown Santa Rosa. With increasing development pressure in both areas, the city is seeking a vision and strategies to spur housing and economic development, as well as addressing the connectivity challenges between the two sites. The Resource Team weighed in on urban design approaches that can help mitigate the physical separation caused by the highway and superblock.

Mayor Tecklenburg presented the redevelopment proposal for a suburban commercial center in West Ashley neighborhood of Charleston. The city would like to pilot this project as a suburban retrofit model for other commercial centers along St. Andrews Boulevard. The Resource Team offered suggestions on the proposed site plan, providing examples of best practices and discussing sprawl repair strategies related to housing, open space, and parking.

Mayor Barry concluded Thursday’s discussions by presenting on the city’s efforts to engage North Nashville neighborhood in the community planning process with sensitivity to equity and equitable development. After an open dialogue that forged a deeper understanding of the legacy and challenges the neighborhood must overcome, the Resource Team emphasized the responsibility of the anchor institutions in the community and encouraged the mayor to invest in social capital before taking on physical planning and big infrastructure projects.

Mayor-President Robideaux commenced the discussions on the final day of the Institute with a presentation on University Avenue that runs from Interstate 10 to downtown Lafayette. The city is seeking revitalization strategies for the street, land use, and redevelopment to address the disinvestment in parts of the 1.5-mile corridor. The Resource Team provided recommendations on a broader vision, making University Avenue a great street for all types of users and a beautiful gateway to the city.

Mayor Oravec presented on Port St. Lucie’s efforts to retool and rethink an old plan for the Civic Center site to reflect the realities of the current real estate market. After assessing the market study data, the Resource Team brainstormed ideas for the site, looking at market feasibility and land use economics for different development scenarios, as well as identifying potential institutional and private sector partners to help move the project forward.

Mayor Longwell followed with a discussion on several opportunity sites in downtown Wichita, including the convention center, exhibition hall, and library. The Resource Team advised the mayor to coordinate development activities with the existing assets on both sides of the river, taking a holistic approach in district planning and visioning exercises. A successful development framework would strengthen the connections between downtown and the river, providing better access and bringing more activities to the waterfront promenade.

Mayor Furey concluded the Institute by presenting on the city’s efforts to revitalize Old Town Torrance, seeking a long-term vision that advances walkability, livability, and economic development goals. The Resource Team deliberated the viability of downtown in the regional context and advised the mayor on housing, parking management, and retail strategies to attract investment to Old Town.

The Mayors’ Institute on City Design is a leadership initiative of the National Endowment for the Arts in partnership with the American Architectural Foundation and the United States Conference of Mayors. The 65th National Session was sponsored in part by United Technologies Corporation. Since 1986, MICD has helped transform communities through design by preparing mayors to be the chief urban designers of their cities. MICD conducts several sessions each year. For a list of upcoming events, past participants, or for more information, visit micd.org and follow @MICDdotORG on Twitter.