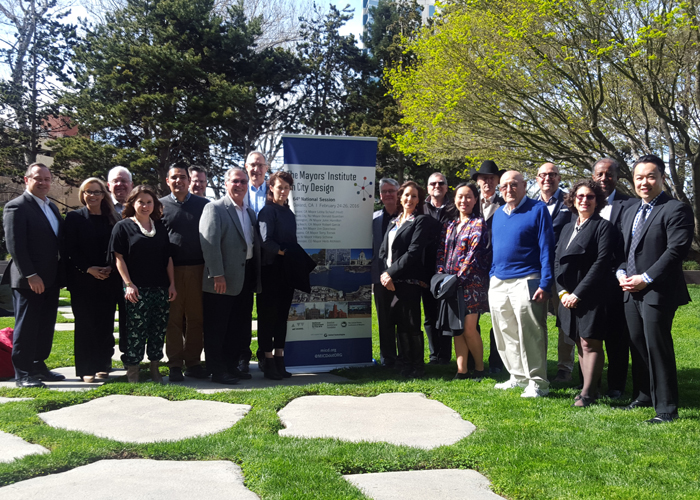 The 64th National Session began with tour of Oakland led by Planning Director Rachel Flynn. The tour showcased a number of historic sites and new development projects around the city’s vibrant neighborhoods. Later that evening, the opening reception was held at the historic Camron-Stanford House overlooking Lake Merritt, followed by dinner. Mayor Schaaf welcomed participants to the City of Oakland after remarks were made by the MICD Director Trinity Simons and The United States Conference of Mayors CEO and Executive Director Tom Cochran.

Mayor Hamilton initiated the design discussions the following morning, presenting on Bloomington’s efforts to develop the Switchyard Park, a new linear park south of downtown. The city would like to maximize park access to the adjacent neighborhoods and evaluate land use opportunities around the site. The Resource Team advised the mayor to prioritize funding and implement a housing strategy to ensure equitable development of the park.

Mayor Garcia followed with a discussion on a potential development parcel in Long Beach to help the city prepare for an early internal dialogue about the future uses of the site. After an open conversation with the mayor, the Resource Team offered development scenarios and design strategies for each vision, as well as identifying the short- and long-term challenges and opportunities as the city moves forward with the project.

Mayor Atchison concluded Thursday’s discussions by presenting on Westminster’s efforts to develop a new downtown. Emphasizing an incremental development approach to create authenticity and foster a sense of place, the city is seeking recommendations on the phasing plan and “small-lot” strategy. The Resource Team weighed in on the benefits and shortfalls of the proposed development strategies and gave feedback on the site plan and parking.

Mayor Donchess commenced the discussions on the final day of the Institute with a presentation on the western gateway to downtown Nashua. Building on the momentum of the new Broad Street Parkway, the city would like to conceptualize a vision for the gateway area using sustainable development practices and looking at new street configurations to promote walkability, transit use, and compact development pattern. The Resource Team encouraged the mayor to set a bigger and broader vision that amplifies the existing open space assets and employs green infrastructure solutions to address some challenges of the site.

Mayor Tornek presented on Pasadena’s efforts to re-envision the South Fair Oaks Specific Plan area as a new, large-scale TOD district centered around two mixed-use corridors leading to Old Pasadena. The city is interested in building on the presence of two institutional anchors and the Metro Gold Line station. The Resource Team offered suggestions on the mix of uses for the opportunity sites and recommended urban design strategies that can help strengthen the connection to the light-rail station.

Mayor Schieve concluded the Institute by presenting on the revitalization strategy for downtown Reno. The city would like to transform the area by providing student housing, bringing in neighborhood-serving amenities, and drawing a stronger connection to the university located a few blocks north. The Resource Team gave guidance on a key intersection anchored by city-owned properties, using public art and creative placemaking approaches to help inform the broader revitalization goals.

The Mayors’ Institute on City Design is a leadership initiative of the National Endowment for the Arts in partnership with the American Architectural Foundation and the United States Conference of Mayors. The 64th National Session was sponsored in part by United Technologies Corporation. Since 1986, MICD has helped transform communities through design by preparing mayors to be the chief urban designers of their cities. MICD conducts several sessions each year. For a list of upcoming events, past participants, or for more information, visit micd.org and follow @MICDdotORG on Twitter.