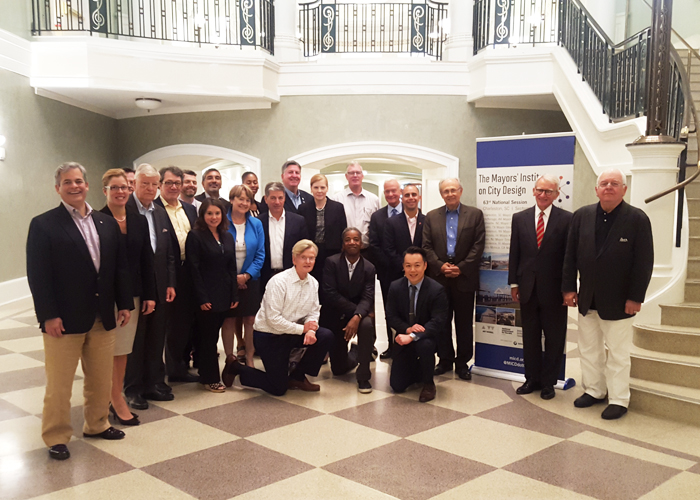 The 63rd National Session began with a walking tour of the historic downtown Charleston led by Horizon Project Foundation CEO Michael Maher. The tour showcased major downtown sites that have been instrumental to Charleston’s transformation as a destination city, including King Street, Waterfront Park, and historic preservation efforts of the city’s residences. Later that evening, the opening reception and dinner were held at City Gallery, which prominently features Charleston’s waterfront revitalization. Mayor Riley presented on the role of design in Charleston’s transformation after remarks were made by the MICD Director Trinity Simons; National Endowment for the Arts Director of Design Programs Jason Schupbach; American Architectural Foundation President and CEO Ron Bogle, Hon. AIA; and the United States Conference of Mayors CEO and Executive Director Tom Cochran.

Mayor Kirk Caldwell initiated the design discussions the following morning, presenting on Honolulu’s efforts to redevelop the Neal S. Blaisdell Center site located at the heart of downtown. In response to local needs for modern performing arts and exhibition space, the city and county envision the site as a true civic center that appeals to local ethos, honoring the island’s inherent connections to the past, the mountains, and the sea (“mauka, kula, makai”). The Resource Team advised the mayor to expand the vision in a broader neighborhood context and establish a grid by creating a network of streets through the site.

Mayor Manheimer followed with a discussion on the East End neighborhood abutting downtown Asheville. Prompted by the development pressure to meet rising demand for rental properties, the city is seeking community engagement strategies to help guide the visioning process and define the planning area boundaries of the neighborhood. The Resource Team encouraged the mayor to probe the issues of growth and change in the community, understanding its assets, opportunities, and challenges through the lens of East End’s residents.

Mayor Hafen presented on the city’s efforts to reimagine the Henderson Convention Center and the adjoining Events Plaza on Water Street. The city is evaluating different redevelopment scenarios for the site, including facility upgrades, remodeling, and expansion. The Resource Team weighed in on the feasibility of a new convention center in the regional context and offered design strategies as well as programmatic ideas for the plaza.

Mayor Elorza concluded Thursday’s discussions by presenting on Providence’s efforts to revitalize the historic Cathedral Square that sits on the southwestern edge of downtown. Proud of the square and its heritage, the city is seeking low-budget, easily implementable ideas to help animate the space, bringing critical mass and breathing new life into the public realm. After giving guidance on the broader connectivity and safety issues, the Resource Team pointed out that the square should also serve people who live around it.

Mayor McDonough commenced the discussions on the final day of the Institute with a presentation on Hope Township’s growth strategy. With the goal of increasing its tax base, the town is seeking land use, design, and development framework to attract businesses to the I-80 corridor, recognizing that the limited supportive infrastructure presents a challenge. The Resource Team offered suggestions on how the town can capitalize on its rural character and history through tourism, emphasizing that Hope should make its identity legible and think of the town as part of a larger landscape system in the region.

Mayor Berkowitz presented on Anchorage’s efforts to conceptualize a pilot “neighborhood resilience center” in east downtown that embodies the sustainable community principles. The resilience center model development would serve as a community center that is a hub for community events and gatherings, providing neighborhood-focused services such as urban agriculture, sustainability-focused education, and gymnasium. The Resource Team discussed the resiliency concept in the context of Anchorage and identified key factors that can inform the site selection criteria for a pilot facility.

Mayor Adler followed with a presentation on the South Central Waterfront located along Lady Bird Lake across from downtown Austin. The city would like to define the leadership role of the mayor in planning and development not only in this project but also citywide. The Resource Team broached the expectations, purview, and limitations of the mayor’s role in championing good design, as well as offering specific suggestions on the working plan for the South Central Waterfront.

Mayor McKeown concluded the Institute by presenting on Santa Monica’s efforts to develop a key parcel at the terminus station of Los Angeles Metro’s Expo Line. The city is looking at short- and long-term uses of the property, site access and circulation, land use around the station, and urban design. The Resource Team considered topographic challenges of the parcel and advised the mayor to close the freeway off-ramp nearby to help facilitate the multi-modal connections and traffic flow around the site.

The Mayors’ Institute on City Design is a National Endowment for the Arts leadership initiative in partnership with the American Architectural Foundation and the United States Conference of Mayors. The 63rd National Session was sponsored in part by United Technologies Corporation. Since 1986, MICD has helped transform communities through design by preparing mayors to be the chief urban designers of their cities. MICD conducts several sessions each year. For a list of upcoming events, past participants, or for more information, micd.org and follow @MICDdotORG on Twitter.