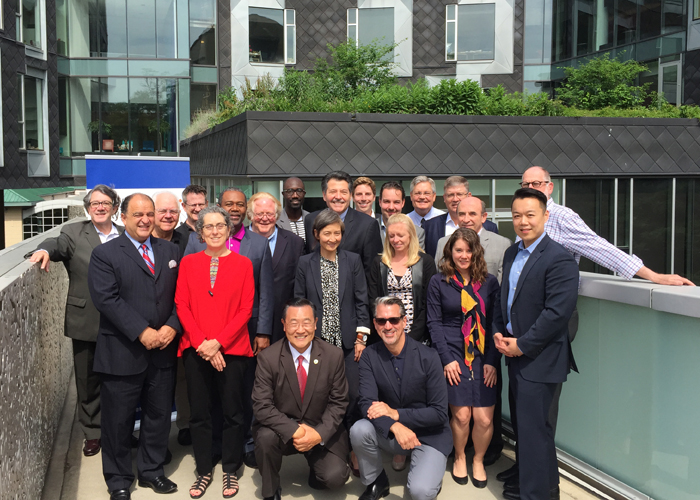 The 62nd National Session began with a tour of Pittsburgh led by Mayor Peduto. The tour showcased major development sites, institutional anchors, and historic neighborhoods, including Lawrenceville, Shadyside, and Mt. Washington. Later that evening, the opening reception was held at the Phipps Conservatory and Botanical Gardens, followed by dinner at the Carnegie Museum of Art Hall of Architecture. Mayor Peduto welcomed participants to the City of Pittsburgh after remarks were made by the MICD Director Trinity Simons; National Endowment for the Arts Design Specialist Jen Hughes; American Architectural Foundation President and CEO Ron Bogle, Hon. AIA; and the United States Conference of Mayors CEO and Executive Director Tom Cochran.

Fort Myers Mayor Henderson initiated the design discussions the following morning, presenting on the city’s efforts to implement a district plan for Central Fort Myers (“Midtown”). Building on the success of the downtown River District, the city would like to create a walkable, mixed-use community in Midtown that complements downtown redevelopment and increases the tax base of Fort Myers. The Resource Team advised the mayor to concentrate the planning efforts and programmatic activities on a small geography to create a critical mass and bring awareness to the area.

Laredo Mayor Saenz followed with a discussion on the new outlet mall and the convention center at the U.S.-Mexico border. The city is looking to capitalize on these investments to help rejuvenate and strengthen the connections to the historic downtown. Stressing the importance of having a master plan to communicate the vision for downtown, the Resource Team gave guidance on the site selection criteria for the convention center and outlet mall parking.

Jackson Mayor Yarber presented on the city’s efforts to build the Super Livingston Park in West Jackson, using the park as an economic development catalyst to uplift the surrounding neighborhoods. Still in the initial phases of planning, the city is seeking advice on design, as well as strategies for funding, phasing, and community engagement. The Resource Team offered suggestions on park improvements and identified a site where the city can bring immediate and transformative impacts to the community.

Beaufort Mayor Keyserling concluded Thursday’s presentations with a case study on downtown expansion, looking specifically at parking management strategies and land use economics to spur investment along the commercial corridors. The city is interested in expanding the perception of downtown in a way that is complementary to the existing three-block downtown footprint and better serves local neighborhoods with a greater business variety. The Resource Team weighed in on parking management options, including different approaches to pricing on-street parking and the feasibility of a parking garage.

Irvine Mayor Choi commenced the discussions on the final day with a presentation on the Cultural Terrace District within the Orange County Great Park, touted as the “first great metropolitan park of the 21st century.” The city is looking at the design and siting of a new library that serves as a centerpiece of the Cultural Terrace District. The Resource Team offered suggestions on the site selection criteria, encouraging the mayor to pick a location and building orientation that maximize the connections to the future transit-oriented development at the train station.

Augusta Mayor Davis followed with a presentation on downtown Augusta and the Augusta Riverwalk. Recognizing the opportunities for upzoning, infills, and redevelopment, the city would like to strengthen the connections between the riverwalk and downtown’s main street. The Resource Team advised the mayor to focus the planning efforts on the core blocks and implement form-based code to guide development and increase residential population along the riverfront.

Frisco Mayor Maso concluded the Institute with a discussion on Frisco Junction, seeking design and land use strategies to stitch the new Frisco Square development and the historic downtown. The Resource Team encouraged the mayor to enhance the connection for pedestrians and cyclists on Frisco Square Boulevard, lining the street with mixed-use development with active ground-floor spaces and storefronts.

The Mayors’ Institute on City Design is a National Endowment for the Arts leadership initiative in partnership with the American Architectural Foundation and the United States Conference of Mayors. The 62nd National Session was sponsored in part by United Technologies Corporation. Since 1986, MICD has helped transform communities through design by preparing mayors to be the chief urban designers of their cities. MICD conducts several sessions each year. For a list of upcoming events, past attendees, or for more information, visit micd.org and follow @MICDdotORG on Twitter.