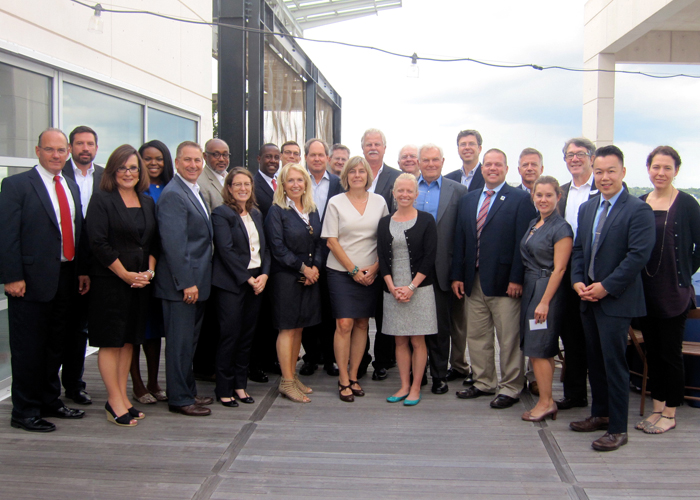 The 60th National Session began with a walking tour of historic downtown Charleston led by Horizon Project Foundation CEO Michael Maher. The tour showcased major downtown sites that have been instrumental to Charleston’s transformation as a destination city, including King Street, Waterfront Park, and historic preservation efforts of the city’s residences. Later that evening, the opening reception and dinner were held at City Gallery, which prominently features Charleston’s waterfront revitalization. Mayor Riley presented on the role of design in Charleston’s transformation after remarks were made by the MICD Director Trinity Simons, National Endowment for the Arts Design Specialist Jen Hughes, American Architectural Foundation President and CEO Ron Bogle, Hon. AIA, and the U.S. Conference of Mayors CEO and Executive Director Tom Cochran.

Mayor Kriseman initiated the design discussions the following morning, presenting on St. Petersburg’s efforts to strengthen the identity and stimulate economic development in the Warehouse Arts District abutting downtown. The city would like to leverage the momentum of the Warehouse Arts Enclave to catalyze and inspire other redevelopment opportunities in the area and provide better connectivity between the arts district, downtown, and midtown. The Resource Team advised the mayor to create a visioning plan for the district, focusing on a key intersection at 22nd Street South, 5th Avenue South, and the Pinellas Trail.

Mayor Vaughan followed with a discussion of the historic World War Memorial Stadium and Greensboro Farmers Curb Market. The city is seeking land use and design strategies to make the site a viable neighborhood center, especially through programming at the stadium, expanding and building on the success of the farmers market, and redeveloping two adjacent city-owned facilities. The Resource Team encouraged the mayor to consider multi-purpose use for the stadium and integrate the nearby greenway and the creek to add value and highlight larger opportunities for the site.

Mayor Corbett presented on Cedar Rapids’ efforts to create a pedestrian-friendly environment along the 3rd Street corridor that links the downtown convention center to the Czech Village/New Bohemia District. The city is looking for land use options and design solutions that can foster the connection between these two nodes, making 3rd Street safe, attractive, and walkable for pedestrians. After explaining the concept of main street and providing several examples, the Resource Team offered suggestions on how the city can incorporate demonstration projects that feature green infrastructure on key blocks to create a continuous visual interest on 3rd Street and help manage stormwater runoffs.

Mayor Warren followed with a presentation on the Firefighters’ Triangle, Centre Triangle, and Cypress Street Triangle that make up the Newton Centre Village. Of particular interest to the mayor and the city is onsite parking, which is impacted by Boston’s MBTA Green Line station located on Union Street. The Resource Team gave guidance on station-area parking management, as well as streetscaping and planting strategies for all 13 villages in Newton.

Mayor Barnett concluded Thursday’s discussions by presenting on Rochester Hills’ efforts to build a 70-acre Riverbend Park. The city would like to develop the site with minimal intrusion to keep the natural beauty of prairie, dense hardwood forests, and pristine wetlands intact. Emphasizing a larger vision for the park, the Resource Team helped the mayor prioritize short- and longer-term objectives to stay focus on the goal of creating a world-class recreational experience.

Mayor Brown commenced the discussions on the final day of the Institute with a presentation on East Compton Boulevard, seeking design strategies to “humanize downtown.” The area is anchored by Metro Blue Line station, a new Transit Center, Civic Center complex, and new housing development. The Resource Team weighed in on the proposed plan for the adjacent blocks between Alameda Street and Santa Fe Avenue, and offered suggestions on making East Compton Boulevard safer for pedestrians and cyclists.

Mayor Berke presented on Chattanooga’s efforts to redevelop the Harriet Taubman Homes, a former HUD’s public housing site in East Chattanooga. The city is considering several redevelopment scenarios at various land use intensities and mix of uses for the proposed industrial site. The Resource Team encouraged the mayor to expand the planning area beyond the immediate project boundaries and select a site plan that strikes a healthy balance between community development and job creation.

Mayor Jensen followed with a presentation on the EPIC Mega Recreation Center and Aquatic Center inside City Park. The city would like to create an internal network of streets to facilitate people flow from the main facilities to the lakes and other attractions within the site. The Resource Team advised the mayor to create multiple access points to the park, invest in a parking management system, and consider shared parking with the existing facility.

Mayor Gonzales concluded the Institute by presenting on Santa Fe’s efforts to reimagine St. Michael’s Drive, an underutilized commercial corridor that lies at the geographic center of the city. The city is looking for out-of-the-box approaches to transform St. Michael’s Drive into an active, vibrant street that reflects San Fe’s heritage and local character. The Resource Team encouraged the mayor to take ownership of the highway, seek partnership with the institutional anchors on both ends of the corridor, and create a signature feature for the corridor.

The Mayors’ Institute on City Design is a National Endowment for the Arts leadership initiative in partnership with the American Architectural Foundation and The United States Conference of Mayors. The 60th National Session was sponsored in part by United Technologies Corporation. Since 1986, MICD has helped transform communities through design by preparing mayors to be the chief urban designers of their cities. MICD conducts several sessions each year. For a list of upcoming events, past attendees, or for more information, visit micd.org and follow @MICDdotORG on Twitter.