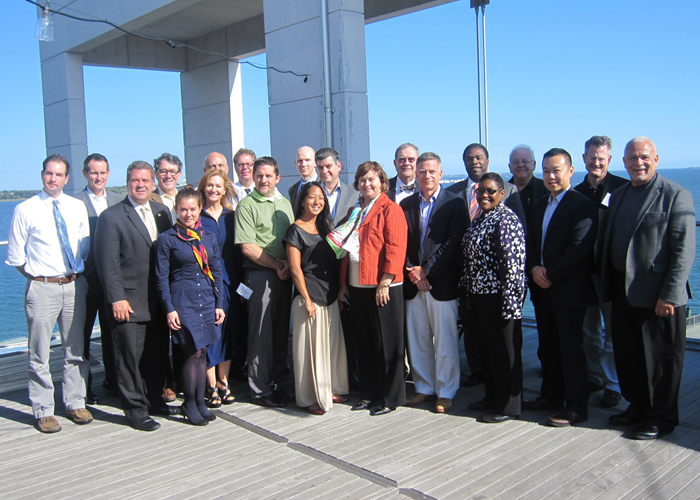 October 2013 – CHARLESTON – The Mayors’ Institute on City Design returned to Charleston, SC from October 16-18 for its 57th National Session. Hosted by Mayor Joseph P. Riley, Jr. and the City of Charleston, the event was attended by Mayor Alvin Brown of Jacksonville, FL; Mayor William Collins of Summerville, SC; Mayor Karen Freeman-Wilson of Gary, IN; Mayor Mark Holland of Kansas City, KS; Mayor Patrick Murphy of Lowell, MA; Mayor Anna Peterson of Salem, OR; and Mayor Mike Spano of Yonkers, NY. Experts in architecture, landscape architecture, urban planning, real estate development, transportation, and urban design joined the mayors in the two-and-a-half-day discussions and offered pragmatic advice on how the mayors could approach the urban design challenges facing each of their cities.

The 57th National Session began with a walking tour of downtown Charleston led by Michael Maher, Director of the City of Charleston’s Civic Design Center. The tour showcased major downtown sites that have been instrumental to Charleston’s transformation as a destination city, including King Street, Waterfront Park, and historic preservation efforts of the city’s residences. Later that evening, the opening reception and dinner were held at City Gallery, which prominently features Charleston’s waterfront revitalization. Mayor Joseph P. Riley, Jr. presented on the role of design in Charleston’s transformation after remarks were made by the Mayors’ Institute on City Design Director Trinity Simons; American Architectural Foundation President & CEO Ron Bogle, Hon. AIA; and the United States Conference of Mayors CEO & Executive Director Tom Cochran.

Salem Mayor Peterson initiated the design discussions the following morning, presenting on her city’s efforts to redevelop the area north of downtown along the Broadway corridor and Division Street node. The city is seeking strategies to support commercial uses, increase housing stock, and stimulate growth in the area. The resource team advised the mayor to reconfigure the streets, making north downtown more walkable and pedestrian-friendly.

Yonkers Mayor Spano followed with a discussion of the River Park Center that features the third phase of the daylighting of the Saw Mill River. The city is looking at opportunities to use this project to catalyze development and make infrastructure upgrades in the surrounding historic neighborhoods. The resource team encouraged the mayor to look at the site holistically and take advantage of the riverfront and the city’s proximity to New York City.

Gary Mayor Freeman-Wilson presented on her city’s efforts to develop the Jackson neighborhood, so named because it contains the birthplace of Michael Jackson. The city is looking to build on the momentum of another rehabilitation project slated for construction in August 2014, using it as a revitalization tool to make improvements in the community. The resource team advised the mayor to engage a local university and other stakeholders in this effort.

Lowell Mayor Murphy concluded Thursday’s discussions with a presentation on the Lowell Bleachery EcoDistrict that sits between two residential neighborhoods south of downtown. The city is seeking design solutions, land use recommendations, and financing options for several industrial buildings on the property, including the Prince Spaghetti factory site, that are partially occupied by temporary tenants. The resource team encouraged the mayor to preserve the existing structures and recommended approaches to improve onsite connectivity and access from the west.

Jacksonville Mayor Brown commenced the discussions on the final day of the Institute by presenting on his campaign vision to revitalize downtown. Due to the sheer size and scale of the place, Mayor Brown focused his presentation on two subareas around the Jaguars football stadium and the shipyards. The resource team weighed in on the benefits of keeping the shipyards as open space, targeting high-density residential development along the waterfront, and giving extra design scrutiny on how massive buildings in downtown interface with the streets and pedestrians on the ground floor.

Summerville Mayor Collins followed with a presentation on the Jessen Boat Landing and the historic Dorchester State Park. The town recognizes opportunities to introduce recreational uses and educational programs for these sites, aiming to draw more visitors and celebrate Summerville’s history. After providing examples for the appropriate uses and activities, resource team members advised the mayor to create and foster a sense of place by mitigating traffic speed on Dorchester Road where the entrances to both sites are located.

Kansas City Mayor Holland concluded the Institute by presenting on his city’s efforts to create a greenway across the West End district, connecting two neighborhood parks and a proposed grocery store to a local high school. This plan is consistent with the mayor’s citywide initiative to promote healthy living and active lifestyle. The resource team offered short- and long-term visions for the greenway and encouraged the mayor to locate the grocery store on Minnesota Avenue where it will be accessible by transit.

The Mayors’ Institute on City Design is a National Endowment for the Arts leadership initiative in partnership with the American Architectural Foundation and the United States Conference of Mayors. The 57th National Session was sponsored in part by United Technologies Corporation. Since 1986, the Mayors’ Institute has helped transform communities through design by preparing mayors to be the chief urban designers of their cities. The Mayors’ Institute conducts several sessions each year. For a list of upcoming events, past attendees, or for more information, visit micd.org and follow @MICDdotORG on Twitter.