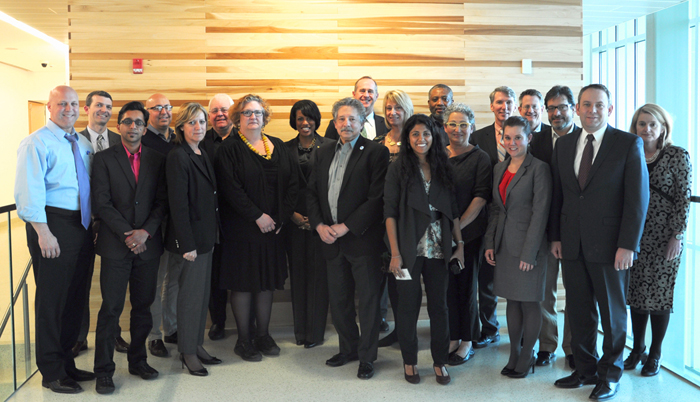 The 55th National session began with a tour of downtown New Orleans led by William Gilchrist, FAIA, Director of Place-Based Planning for the City of New Orleans. The tour showcased significant downtown projects that have been instrumental to New Orleans’ transformation after Hurricane Katrina, including the Lafitte Greenway, Iberville housing, the new hospital district, and the Union Passenger Terminal Station.  Later that evening, a reception and dinner were held at the Patrick F. Taylor Library at the Ogden Museum of Southern Art, located in the burgeoning warehouse district.  Mayor Mitchell J. Landrieu welcomed participants to the city of New Orleans after remarks were made by the Mayors’ Institute on City Design Director, Trinity Simons and the United States Conference of Mayors CEO and Executive Director Tom Cochran.

Burlington, Vermont Mayor Weinberger initiated design discussions the following morning by presenting on his city’s efforts to increase accessibility to the Lake Champlain waterfront.  The city has explored Cherry Street as a potential connection to the Lake, which could provide a second access point to the water in addition to College Street.  The resource team commended the Mayor on his efforts to gather community insights and suggested improving the design of Battery Street, particularly at its intersection with Cherry Street.

Madison, Wisconsin Mayor Paul Soglin followed with a discussion of the East Washington Avenue corridor.  With its terminus at the regal capitol building, the city would like to strengthen the light industrial corridor to become a mixed-use gateway into the heart of the city.  The resource team offered advice on how to take advantage of the industrial character of the area through branding, signage, and public art opportunities along the corridor.

Baltimore Mayor Rawlings-Blake presented on her city’s efforts to improve the area around the stadiums and new waterfront casino.  The city is working to ensure that the new casino and corresponding parking facility are integrated into the fabric of the surrounding industrial area and near by stadiums.  The resource team offered suggestions on how to strengthen the pedestrian experience along Warner and Russell Streets through retail opportunities, streetscaping improvements, and waterfront accessibility.

Spokane, Washington Mayor Condon concluded Thursday’s discussions with a presentation on the Lincoln Heights District Center.  The city would like to work with the existing property owner to improve the strip mall shopping center to include a mix of uses and densities.  The resource team offered suggestions on potential program and complimentary uses for the site along with improving streetscape connections to the surrounding neighborhood.

Anaheim, California Mayor Tait commenced discussions on the final day of the Institute by presenting his city’s efforts to transition the Platinum Triangle district into the downtown of Orange County.  The city has many assets in the district including a transit center under construction and various sporting and entertainment venues.  The resource team focused on how to improve physical connections between these amenities and the adjacent neighborhoods.

Hampton, Virginia Mayor Ward followed with a presentation on the Goodyear redevelopment site located in the downtown of the city.  Several concepts have been designed over the years for the site, but none have been implemented.  The resource team offered suggestions on how to catalyze implementation of plans through existing groups and by increasing connectivity downtown and to the harborfront.

New Orleans, Louisiana Mayor Landrieu presented on his city’s efforts to redevelop Charity Hospital into a civic headquarters for the city.  The historically significant hospital is no longer able to function as its original use but the city is looking for a way to reuse the main structure of the building, potentially for city-related services.  The resource team gave guidance on phasing the redevelopment of the hospital campus while providing open space opportunities for the city.

Surprise, Arizona Mayor Wolcott concluded the Institute by presenting on her city’s efforts to improve Grand Avenue near the old town site of the city.  The city has been working on transit oriented development plans for the future of the growing Grand Avenue corridor along with significant gateway sites.  The resource team encouraged the Mayor to engage the local community in the design process to help guide the future programming and needs of the site.

The Mayors’ Institute on City Design is a National Endowment for the Arts leadership initiative in partnership with the American Architectural Foundation and the United States Conference of Mayors. The 55th National Session was sponsored in part by United Technologies Corporation.  Since 1986, the Mayors’ Institute has helped transform communities through design by preparing mayors to be the chief urban designers of their cities.  The Mayors’ Institute conducts several sessions each year. For a list of upcoming events, past attendees, or for more information, visit micd-st.camna.com.